Did you know that there’s a street in Singapore where three places of worship co-exist in harmony? We’re talking about Waterloo Street, home to the oldest surviving synagogue in Singapore and Southeast Asia, a Hindu temple and a Buddhist temple.

Over on the next street – Queen Street – are churches like the Catholic Church of Saints Peter & Paul, Grace (S.C.C.) and Kum Yan Methodist Church, while on Bencoolen Street sits Singapore’s second oldest mosque which dates back to 1825.

To discover fascinating nuggets of information about the three streets’ places of worship as well as Singapore’s multi-racial and multi-religious heritage, join the Unity in Diversity walking tour conducted by A+B Edu Tours and Travel. The two-hour history and heritage guided walking tour was a finalist for Best Tour Experience at the 2017 Singapore Tourism Awards.

See how many of these fascinating facts are familiar to you. 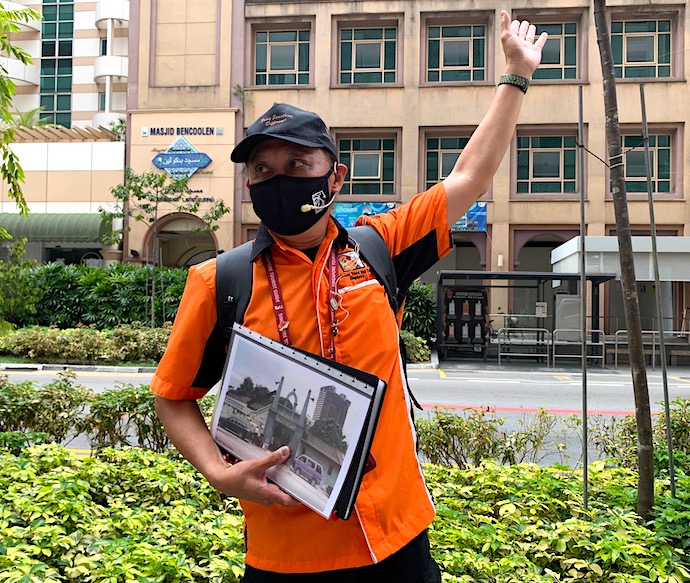 Built between 1825 and 1828 on Bencoolen Street, Masjid Bencoolen was originally an attap mosque constructed by Indian-Muslim workers who were brought from India to Bengkulu in Indonesia by the British.

3. Maghain Aboth Synagogue is home to Singapore’s only kosher supermarket

4. On the grounds of the Cathedral of the Good Shepherd is an olive tree

Look out for an olive tree on the grounds of the Cathedral of the Good Shepherd at the junction of Queen Street and Bras Basah Road. The olive tree points to the ancient olive trees in the Garden of Gethsemane, at the foot of the Mount of Olives in Jerusalem, where Jesus prayed on the night of His betrayal and arrest.

5. The Sri Krishnan Temple on Waterloo Street has a Buddhist urn in front of it

As the Sri Krishnan Temple stands next to Kwan Im Thong Hood Cho Temple, it’s not uncommon to see Buddhist and Taoists devotees lighting joss sticks in the giant urn outside the Hindu temple. There’s even a Guan Yin (Goddess of Mercy) statue inside the Temple.

The divination predictions of Kwan Im Thong Hood Cho Temple are said to be highly accurate. Wooden sticks in a cylindrical container are shaken and the sticks that fall out are interpreted to foretell a person’s future. In 1990, the temple became the first in Singapore to provide divination slips with English translations for English-educated devotees and tourists.